Dean L. Balsamini, director of the SI SBDC, to be feted

during award and networking event on Oct. 8 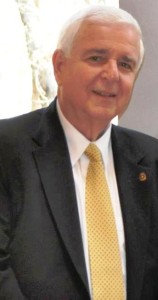 Dean L. Balsamini, director of the Staten Island Small Business Development Center at the College of Staten Island, Willowbrook, was instrumental in expanding the organization’s services into Brooklyn.

STATEN ISLAND/BROOKLYN, N.Y.  (SEPT. 2, 2014) — Dean L. Balsamini, who heads the SBDC at the College of Staten Island in Willowbrook, was instrumental in expanding the organization to include an additional Island office in the Empire State Bank Building, New Dorp, and another in the Santander Building in the Brooklyn community of Bay Ridge. He will be among a group of individuals to be lauded during the event.

The Staten Island SBDC assists small businesses and aspiring entrepreneurs with a wide array of cost-free confidential guidance and technical assistance. Since launching in 1993, the organization has worked directly with more than 6,700 businesses, helping them to invest more than $148.5 million in the area’s economy, and creating or saving more than 4,500 jobs.

The Kings of Kings County Awards & Networking Event honors leading Brooklyn men for their outstanding leadership and contributions to the community. The gathering will take place 6 to 9 p.m. at The Grand Prospect Hall, 263 Prospect Ave., in the Brooklyn neighborhood of Park Slope.

“Being named as one of the Kings of Kings County is a wonderful recognition,” Balsamini said. “I’m honored to be included among a group of such accomplished individuals who have given so much effort to the betterment of Brooklyn. I grew up in the borough and, although Staten Island also holds a special place in my heart, my love of Brooklyn and my devotion to the community will never waver.”

Residents of Pleasant Plains, Staten Island, Balsamini and his wife, Jo-Ann, were born and raised in Bay Ridge, Brooklyn, and their sons, Dean and David, are Brooklyn natives, as well.

Balsamini joined the SBDC in 2005 following four years as chairman of the Island’s SCORE chapter, which was preceded by a decades-long career as a global executive with AT&T.

Extensively involved in civic and community activities, Balsamini is a past president of the South Shore Rotary Club, a board member of the Staten Island Children’s Campaign, and an adjunct professor of marketing at the College of Staten Island. He has been honored numerous times for his business and community activities, having been recognized by such organizations as the Society of St. Michael at Xaverian High School in Brooklyn and the Staten Island branch of the New York Urban League for Economic Development.

Active in both boroughs, Balsamini was appointed to a variety of community advocacy positions. He has served as a member of the Grievance Committee for the New York State Supreme Court’s 2nd and 11th Judicial Districts; as a delegate, selected by then U.S. Rep. Vito Fossella, to the December 2005 Conference on Aging in Washington, and as a CSI representative to the Staten Island Chamber of Commerce, where he also serves as a board member. In June 2011, Balsamini was awarded a Paul Harris Fellowship, Rotary International’s highest humanitarian honor.

Money raised from King of Kings raffles will be split between Reaching Out Community Services and the Boy Scouts of America.

Tickets for the event may be purchased online at www.homereporter.com/events.

For additional information about sponsorship or participation opportunities, Lori Pedone of the Home Reporter may be reached at 718-238-6600, ext. 110, or via email at lpedone@homereporter.com.